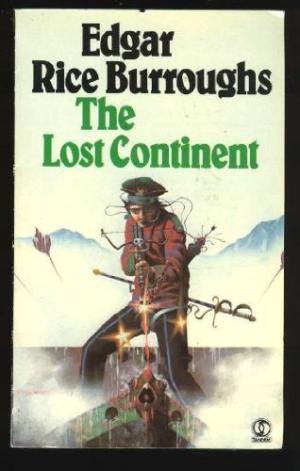 This is the 189th in my series of Forgotten Books.

Somehow in 189 review essays, I have never tackled a book by Edgar Rice Burroughs. ERB was one of the first writers I read regularly, though the titles I had access to were pretty random. When I lived in Iowa Park, Texas (1962 – 1967), the local library was pretty small but they had some ERB, some Tom Swift (the original series) and a smattering of other stuff. So, I read some Venus books, some Pellucidar and other titles, though no Tarzan. They had none of those.

When I got to San Antonio in 1967, the school had a book fair and I saw a copy of Thuvia, Maid of Mars with the Roy Krenkel cover and I fell in love with that series. Mars was Heaven, to quote Mr. Bradbury. So I read a lot of Burroughs. But as a collector I never had many ERB titles. The good ones were already too expensive. I had copies of them all, just no collectible first editions.

In college, I ran across the Fantasy Press edition of Beyond Thirty and The Maneater, a collection of two short novels which had not been reprinted from their early pulp days. I kept that book for many years, but it is now long gone.

I read it back in the 70’s, when I purchased the Fantasy Press edition, and thought it was OK. Not Africa-, Mars-, Venus- or Pellucidar-comparable, but OK. So when I found a UK paperback of Beyond Thirty — now retitled The Lost Continent and with an odd cover — for 50 cents recently, I picked it up with the idea of making it a Forgotten Book.

The novel was written in 1915, just three years after A Princess of Mars and Tarzan of the Apes and was directly affected by World War I. It tells the story of Lt. Jefferson Turck of the Pan American Navy and is set in 2137. Some 200 years earlier, a great war in Europe caused the Western Hemisphere (and its one giant nation Pan America) to declare the rest of the world off limits. Pan America controlled from meridian 30° West to 175° West. The Navy patrolled these coordinates. Lt. Turck is patrolling from Iceland to the Azores in his flying submarine, which can travel in the air or below the waves, when the craft suffers an engine failure as well as a wireless failure. A giant storm pushes the ship into those forbidden zones. Entry into the zone is punishable by death, regardless of the circumstances.

Faced with this likelihood, the ship stops for repairs and Turck goes out fishing with three men. During the fishing trip, his boat is separated from the ship and the four men find themselves left behind.

Not wanting to travel across the Atlantic in a small motorized ship, they decide to try for Europe, specifically England. When they arrive they find themselves hunted by Tigers, but their weapons are sufficient to keep the beasts away. Soon they are near London, where they find lions abounding, and they rescue a young maiden from a semi-human tribesman. The girl turns out to be Victory, the Queen of England! She is in trouble as Buckingham, a member of her tribe, has killed her father the King and wants to marry her so he can become King himself. Buckingham does not like Turck and soon captures him and offers him as a sacrifice to the lions.

With Victory’s help he escapes and she joins the four men as they explore continental Europe. Turck falls in love with Victory and is surprised when she and one of the crewmen desert the remainder of the party and leave them stranded. Here they encounter an army of Abyssinians who are well trained and organized. Turck alone is captured and taken to the local commander, who makes him his personal manservant, which irks Turck since he has never been a servant to a black man before. Whites are inferior to the Abyssinians, and he is treated poorly.

Soon the Emperor Menelek XIV visits, and when presented with captured slaves, immediately picks out Victory as his next paramour. Turck does not like this and has to find a way to rescue her.

Our hero eventually wins out and is reunited with her, the remainder of the crew and makes it back to his world, where things have changed and he is now a hero rather than a condemned traitor.

All in all, it’s an OK read, but not nearly as good as others from this time period. The final 20 pages is extremely rushed, and events which should have taken chapters are shunted off in two sentences. It is lesser Burroughs and it is not hard to see why it took 40 years to be collected. It also suffers from an attitude against the non-white races that I found pretty blatant and jarring to current sensibilities, which is not surprising given some of the charges leveled against his Tarzan books from the same period.

If you’ve read all the other ERB, you should read it. But if you have not, don’t go out of your way to locate it.