This is the 193rd in my series of Forgotten Books.

Wow! Has it really been since last July that I did a Forgotten Book column? Amazing! In that time, I have moved from San Antonio to the wilds of West Texas. When I did the last columns, the movers were coming. I honestly thought it would be a few weeks and I would be back.

But 250 boxes of books and 30+ bookcases require a little bit of time to get organized. Not that I would know what organization is. My books are now generally on the shelves, though their order is still ruled by serendipity. I have some organization on a few cases. My Joe Lansdale books are generally where I can find them. The small group of books and magazines where I have appeared are in one area, A few writers are organized but most are not. But, as my wife says, “I have the rest of my life to get organized.” Because I’m not doing the boxing and moving thing again.

I would probably still be working on that massive undertaking, but this week represents the 100th anniversary of Robert Bloch’s birth. I reviewed a Bloch book (the paperback of The Opener of the Way) last June as my 186th in this series. Normally I do not review two books by a writer within a year, but how often does a 100th birthday come along? Not to mention, technically that review was 2016, and this is 2017.

I picked this title for a couple of reasons. One, I could find it because I had my set of Imaginative Tales in order on the bookcase with digests, and two, it is a funny work — something Bloch excelled at.

When Imaginative Tales debuted in 1954 as a companion to Imagination, they produced some truly wonderful covers for their lead novellas. Issue 3 (January 1955) featured “Black Magic Holiday” as the cover piece. It was their first featuring Bloch, though he would soon appear on several more. The cover was by Harold McCauley and I liked it.

The story was originally published in Fantastic Adventures in 1950 under the title “The Devil With You.” I didn’t realize it when I started reading it, but what the heck? It’s still a good story. And funny. I had read “Lost in Time and Space With Lefty Feep,” which featured the humorous adventures of the title character, about 30 years ago and I laughed quite a bit. I don’t have that title anymore, due to the big book sale of 2007, but it made me kindly disposed toward this title.

So, on to the story. Bill Dawson was a salesman who is touched by the finger of Fate. Deciding to take a vacation from his furniture sales job in Davenport, Iowa in New York City, Bill takes a room in the Hotel Flopmoor. That evening he finds two strangers in his room, Marmaduke Hicks and Tubby XXXXX. They have been residing in the hotel for quite a while, evading the manager Mr. Bipple, in scenes reminiscent of the Marx Brothers in Room Service. When they are discovered in Bill’s room, they play double-or-nothing with Bipple over their bill. They win and before anyone knows anything, they have parlayed Bill’s stay into him owning the hotel. Bipple is deliriously happy. Bill is now the hotel manager on the eve of a convention of magicians checking in for a stay.

The magicians are noted for causing chaos, with rabbits and birds running loose and illusions popping up all over the place. But other weirdness plays in as well, because not all the magicians are prestidigitators. Some are true magicians — and they have sinister plans for the convention and the hotel.

There is much drinking and innuendo, a la Thorne Smith, who was an obvious influence. There’s a fun bit involving a woman cut literally in two, whose halves do not function together, creating chaos. And more fun involving a werewolf and wax figures on a dance floor. Naturally, all of this happens as Hell is about to break loose.

I had fun with this story, and it reminded me that Bloch was excellent whether he was doing horror, science fiction, or fantasy. This one can also be found in The Lost Bloch, Volume One: The Devil With You (Subterranean Press, 1999). Check it out! Or get some Bloch for yourself.

I hope to keep doing these reviews as well as the Forgotten Films. They might possibly not be every week, but I will try. 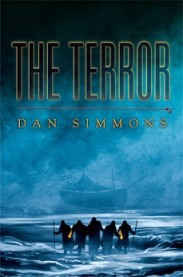 I recently did some modeling for my buddy John Picacio for his excellent cover art on Subterranean Press’ limited edition of Dan Simmons’ The Terror. With my clothes on, of course. Lots of heavy, winter clothes during late spring in sweltering San Antonio, to be exact.

Those shadowy figures in the foreground? Yep. All me. John wisely depicted me in silhouette, fearful that my face would drastically harm book sales.

I had a blast doing it (even if I nearly had a heat stroke), and John delivered an excellent cover that captures the icy essence of The Terror.