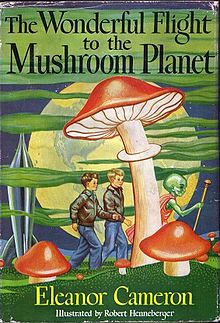 The Wonderful Flight to the Mushroom Planet sets the wayback machine to 1954.

This is the 174th in my series of Forgotten Books.

This week we have a book that shares some similarities with last week’s Shell Scott adventures. No, The Wonderful Flight to the Mushroom Planet is not a humorous detective novel. But like the Prather novel, I missed Eleanor Cameron’s Mushroom Planet novels when I was much younger.

This first novel in the series should have been in my school libraries when I was in grade school and, had they been, I would have found them. But, in those formative years, I was in Alaska and then in small-town Texas. The libraries were small – heavy on reference books and some fiction. In several, there was not a formal library, just collections of books in each teacher’s room and whatever was there was what you got. It was not until junior high in Iowa Park, Texas, that I really found out about libraries and what wonders they held.

The Iowa Park town library was small and featured many older titles. I got to read my first Edgar Rice Burroughs books there and Tom Swift (not the Tom Swift Jr. titles that were coming out when I was at that age; these were the older things). And, since the junior high was in the same building as the high school, we had a more formal library at the school, and there I found Heinlein, Wells and Verne. Those were exciting days of discovery.

But, the Mushroom Planet was never in the galaxies I roamed. I don’t believe I ever heard of those books until I got to college and took a course in children’s literature (kiddy litter, as we called it). And I was not about to read them then.

Somewhere along the way, I acquired the first volume of the series and it has been on my shelves for a while. The other day I decided to pick it up and read it.

It’s a fast read and definitely a kid’s book. There are some attempts at science-y things but not much. And that is deliberate. The first chapter tells you what you need to know with the strange green ad in the paper

A small space ship about eight feet long, built by one or two kids. The ship should be sturdy and well made and should be of materials found at hand. Nothing need be bought. No adult should be consulted as to its plan or method of construction. An adventure and a chance to do a good deed await the boys who build the best space ship.

Yep, you’ve got to be imaginative and a risk taker and your own person. David and his buddy Chuck are the boys who meet up with Mr. Tyco M. Bass, a peculiarly odd person who wants the boys to travel to Basidium X, a small planetoid located 50,000 miles above Earth that only he can see because he has a special filter. He can make a fuel to power this ship and send two boys to it in two hours, and there they can help out the residents of the tiny mushroom planet. They need to bring some food, capture some Basidium air and bring a mascot, for which Mrs. Pennyfeather, David’s chicken serves the role.

They travel to the planet and meet two wise men, Mebe and Oru, and the great King Ta help them solve a problem and return home, all in one night. Of course, no one believes them because they are kids and things happen to their proof.

It was a fun enough book. If I had preteen kids or grandkids, I might have subjected them to this. I think they would have enjoyed it. But I find that for myself, the one book will do. I don’t really care to return to the Mushroom Planet.

What about you readers out there? Someone have a fond spot for these books, or some other ones. As a kid I read a lot of Hardy Boys, Nancy Drew and Tom Swift. Then I found ERB. I was lost from that point on. And at 14, Conan began to appear and Elric the following year or so. And Philip K. Dick. I was doomed.

I hope your new year is going well. I’ll be back with another book next week, certainly one more age appropriate, I think.