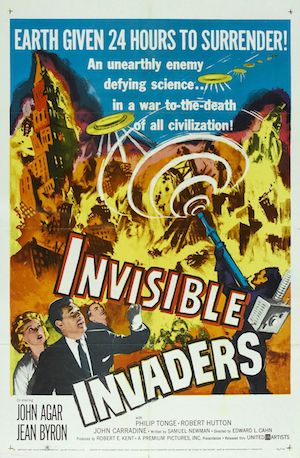 Who wouldn't want to witness a war-to-the-death of all civilization?

This is the 127th in my series of Forgotten, Obscure or Neglected Films

Between 2011 and 2014 I produced a regular (mostly) weekly column of Forgotten, Obscure or Neglected Films as part of the Missions Unknown blog and as a part of a loose gathering of writers and fans coordinated by Todd Mason (there should be a link at the end of the review).

But the Missions Unknown blog got hit with some form of ebola or other disease and has not been revived for more than a year. I loved doing these reviews and inflicting my weird thoughts on folks so when Sanford Allen asked me to continue them, I was ready to continue. So check here each week for cinematic wonders and horrors alike.

That said, let’s go a film I saw as a child and had fond memories of – INVISIBLE INVADERS. The film starts with an annoying voiceover about nuclear experimentation and a quick explosion which kills Dr. Karol Noymann (John Carradine). His friend, Dr. Adam Penner (Phillip Tonge) decides to renounce the nuclear experiments. After giving Noymann’s eulogy, he is visited by the animated corpse of Noymann, possessed by invisible aliens from the moon. They have hidden bases on the moon and have decided Mankind is a pestilence and gives the Earth 24 hours to surrender or be destroyed. They plan a mass invasion to annihilate all Earth life. They have bases on the moon hidden by invisibility.

Earth, being what it is, decides not to surrender on the basis of one man’s word, no matter how renowned. When no surrender comes, the invaders animate corpses and attack the living. Their blank stares and zombie walk would make Tor Johnson proud. When the destruction starts, the Army assigns Major Jay Bruce (John Agar) to assist Penner, his daughter Phyllis (Jean Byron), and co-worker Dr. John Lamont (Robert Hutton). John Agar is his usual semi-wooden self as the military man out to help scientists solve the invasion problem,

It’s not an awful movie. It’s just not good. Script and acting are weak. Special effect rival early Dr. Who for crudity. Many shots just use stock footage. The music overpowers several scenes with terrible results. And that annoying voice over keeps on coming, telling us the story rather than having the script and actors show us the story.

But it appears that it might have had an effect on George Romero as several Night of the Living Dead shots seem to echo scenes from this film. Could be coincidence, but I wonder.

Some of the logic of the film seems to belong to current political debates, with as much logic. The invaders are portrayed with drag marks through sand. Overall, it’s just a mess. Fortunately, at 67 minutes, it’s not an interminable mess. It just seems that way. Watch at your own risk.