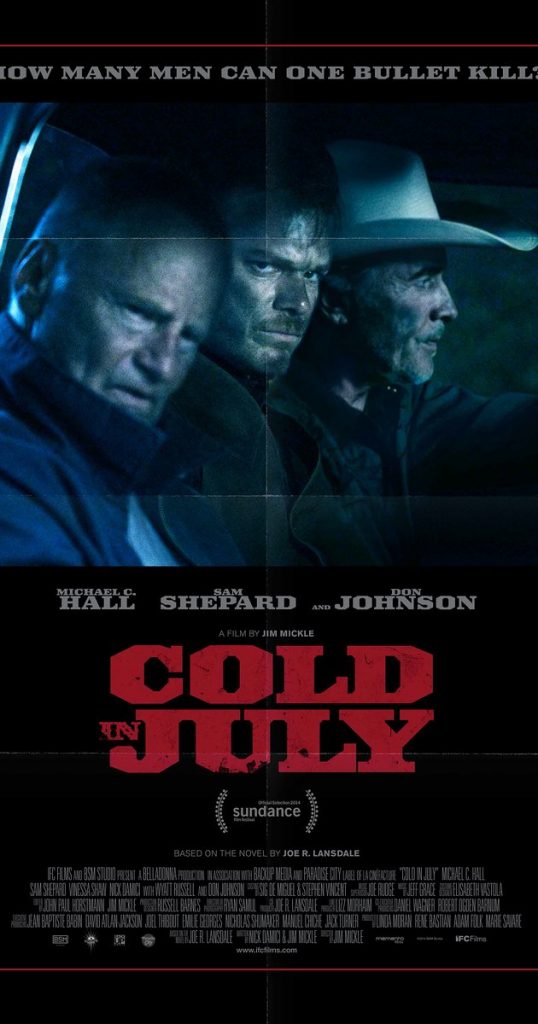 The last 20 minutes of Joe Lansdale’s Cold in July will keep anyone riveted.

This is the 190th in my series of Forgotten, Obscure or Neglected Films

I have been wanting to write about the thriller Cold in July for a while but somewhere in my move last year, the Blu-Ray disappeared. But I saw Joe Lansdale the other day at ArmadilloCon and got another copy from him.

The film is based on the novel of the same name, which came out in 1989. I knew Joe long before then and was anxiously awaiting this novel when it was released. I was in Abilene on the release day and looked for it in the book store. No copies were available. I checked the release date again. I had the correct day, but the store did not have the book. I asked about it and it took another week and a half to come in. I read it that night. It was a powerful book and it blew my socks off.

So, when I heard it was being filmed, I had my doubts. Joe has had many films under option, but not many have made it to the screen. Before this, we had the amazing Bubba Ho-Tep which everyone should see. And a couple of his short stories had been filmed, like Incidents On and Off a Mountain Road for Showtime’s Masters of Horror and Drive In Date, done by Cahill Productions. And, of course, there is Christmas With the Dead, which got no distribution.

Cold in July got a pretty good treatment for an indie film production. First, there was the script by Nick Damici and Jim Mickle. These two would later produce the first season of Hap and Leonard. Nick Damici also got a role in the film as Ray Price, a police lieutenant. It’s a short but important role, which he handled well. Mickle also got to direct. He had a few films earlier, but this was a showpiece.

So, we had a novel, a good script and a good director. They needed a cast. And, boy howdy, did we get a cast. The protagonist of the film, Richard Dane is played by Michael C. Hall. He would normally be the greatest thing in an indie film, but this one managed to lasso Sam Shepard as former convict Ben Russell. And he would normally have been the greatest thing in an indie film. But they also brought in Don Johnson as Private Eye Jim Bob Luke. All three chew up the scenery and make this a great viewing.

The story is a tough one. Richard Dane (Hall) is a family man, married with one child. He works as a picture framer. Life is decent until the night his wife Ann (Vinessa Shaw) hears a noise. He gets out of bed and gets his gun from the closet and loads it. He then confronts a burglar in his living room. The sudden chiming of the clock results in a twitch of his finger and one dead burglar. The police arrive and take statements. Even though the burglar was unarmed, Dane is not held responsible. He and Ann begin the task of cleanup. The sofa has to go; there are brains and blood on the wall, which needs cleaning.

The next day, people continually ask about the incident and praise his action. But Dane is upset. Someone is dead at his hand. The dead man is identified as Freddy Russell, a loser. His only relative is a father (Shepard), recently released from the prison in Huntsville. Dane is still shaken by the events and buys bars for the windows. His temper with his son grows short.

Dane watches the funeral from a distance. Sharp-eyed viewers can see Joe Lansdale in the distance for about one second as the minister handling the service. At the service Dan is approached by Ben Russell, Freddy’s dad. Ben understands the situation but still, Freddy is his son. He makes a threat that indicates that he knows Dane’s son.

That night, when the family returns home, their new locks are broken. They call the police, but nothing is found. Russell continues terrorizing the family until he’s finally chased away. But now the film takes a strange twist. Dane is at the police station and sees a wanted poster for Freddy Russell — and it does not match the man he killed.

Soon, Lieutenant Ray Price (Damici) tells Dane that Russell has been captured going into Mexico and will soon be put away. Dane has not been able to sleep well and as he goes out one night, he sees Price and some other officer load Ben Russell into a police car, handcuffed. The police knock him out, douse him with liquor and put him on the train tracks just about a minute before the late night train is due.

Dane sees all this and cannot let Russell die. He rescues the man and takes him to his family cabin nearby. Dane locks him up there for the night, returning later to try and explain everything. This ends up with the two exhuming the body in the grave and verifying it is not Freddy Russell.

Russell wants to find Freddy and calls in his old Army buddy Jim Bob (Johnson). Things take several wicked turns after this, and no one who has not read the book could ever guess where it was going to end up. The final 20 minutes or so are incredibly intense and not for the weak of stomach.

This one is well worth seeing. Sandi and I saw it on the big screen in its very limited theatrical release. It was stunning. The late night crowd was riveted and stunned by the ending. If you are a follower of Hap and Leonard on TV, you need to see this film. If you haven’t seen either one, start now. And of you have not seen Bubba Ho-Tep, we can’t be friends until you change that. Just saying.