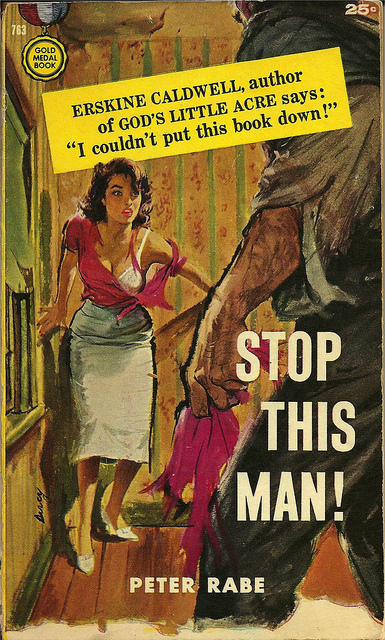 The lurid-looking core of Peter Rabe’s Stop This Man!

This is the 195th in my series of Forgotten Books.

Recently I ordered some paperbacks from a Facebook acquaintance. I got 11 books, which included four Fu Manchu novels by Sax Rohmer, two Fredric Brown novels (one science fiction, one mystery and both great!), and five novels by Peter Rabe.

Peter Rabe is one of those forgotten mystery writers of the ’50’s and ’60s. He’s not quite in the John D. MacDonald, Ross McDonald, Jim Thompson, Charles Williams or Donald Hamilton class, but he is not far behind them. When the box with the books arrived, I was immediately drawn to Stop This Man! because I loved the cover, the blurb from Erskine Caldwell, and because I had not previously read it.

So, it found its way into my hands and my recliner.

Stop This Man! Is an odd novel. It deals with the theft of a 36-pound gold bar and the cross country chase to recover it. Tony Catell is a three-time loser who has just gotten out of prison. He is acquainted with Otto Schumacher, a quiet man who has a gift for planning robberies. Tony has stolen the gold bar based on Otto’s plan. Otto and his girlfriend Selma are waiting for Tony when he arrives with the bar. But, of course, there’s a problem. None of them knew the bar was radioactive. People who get near it suddenly don’t so hot. While the bar doesn’t seem to be affecting Tony, others are dying.

Otto wants to wait but Catell doesn’t. Selma is attracted to Tony’s style and decides to hang with Tony. The FBI have fingered Schumacher as a possible accessory in the crime, but when they confront him, they find only a corpse. Radiation has done its job.

With the heat turned up, Tony decides to by-pass an intermediary and go straight to the buyer, Mr. Smith, in Los Angeles himself. He dumps Selma and tells her to meet him in LA, though he has no intention of keeping that date.

Along the way he tries to keep a low profile, stealing and changing cars frequently. In Arizona, he meets a small town bully with a badge who hates him at first sight. Tony is beaten and jailed and the prospects don’t look good, but he is an experienced felon and soon has the drop on the sheriff.

In LA, Tony meets up with an old friend, the Turtle, at just the right time. He’s got less than a dollar and looks like hell, so the Turtle spots him some money and helps him find the way to Mr. Smith. On his way, Tony makes some enemies – Mr. Smith’s right hand man Topper being the worst of them. He makes a good friend in Topper’s young girlfriend Lily. He makes some corpses. And he meets Selma again. Need I mention the Feds are now breathing down his neck?

Of course, things get worse from there.

Stop This Man! is a good, short read that was reprinted in 2011 by Hard Case Crime. Thank you Charles Ardai for all that you’ve done there!

While it’s enjoyable, the book is odd. Most of the real action takes place off stage. Both the robbery and the initial meeting between Schumacher and Tony have happened before the book starts. Even so, there’s a lot of action in the 160 pages in this novel.

I’ve not read a ton of Rabe. Not like those other writers I listed earlier. What I have read, though, I really enjoyed. I know Ed Gorman was a big fan of Rabe’s work and we discussed it once on the phone for quite a while. While reading this, I thought of Ed a lot. Gone, but not forgotten.

Rabe wrote quite a few books but they are a little hard to find. If you find one, read it. Then look for more. You’ll find some of the oddest tiles on his books. Titles like Benny Muscles In, Murder Me for Nickels, Dig My Grave Deep, A Shroud for Jesso and Kill the Boss Goodbye make his books memorable.

Check him out. I don’t think you’ll regret it.

Series organizer Patti Abbott hosts more Friday Forgotten Book reviews at her own blog, and posts a complete list of participating blogs.  This week, however, Patti is, hopefully, accepting an Edgar Award from the Mystery Writers of America for best paperback novel and the beautiful and talented Todd Mason is hosting for her.