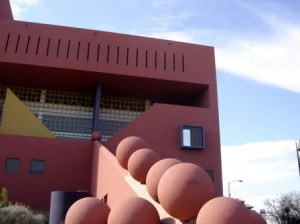 San Antonio's main library: Use it or lose it.

As most, sf/fantasy/horror fans know, San Antonio has always been a good market for movies, TV and other mass media. Books? Eh, not so much.

But a new study hints that may be changing — a little bit at a time.

San Antonio’s ranking near the bottom of the list doesn’t exactly give us bragging rights, I know. But stay with me.

Our city advanced from 64th last year, according to the study. That means we pulled ahead of cities including Los Angeles and Long Beach, Calif., and Henderson, Nev.

And before we beat outselves up about how we compared to the rest of the state (a longstanding Alamo City tradition), consider this: Texas, as a whole, fared poorly on the study. San Antonio is neck-and-neck with Houston (ranked 60th) and ahead of three other Texas cities. Apparently, Austin — with its huge university, tech industry and seat of state government — was the only Texas metro area to even break the top 20. It was 16th.

So, what should we take away from this study?

I think it shows that, despite prevailing trends, our city is taking steps in the right direction. Finally.

San Antonio’s education levels and number of booksellers (still mostly chain stores, but that’s a whole other story) improved year-to-year, and our Internet resources — basically, online book orders and use of newspaper websites — ranked a formidable 20th in the nation.

At the same time, the study demonstrates that to become a truly book-embracing city like Seattle; Washington, D.C.; or Minneapolis — the survey’s three top-ranked metro areas — we’ve got considerable work ahead.

So, Alamo City readers, let’s keep the momentum going. Keep buying books, magazines and newspapers and supporting your local booksellers. And demand that our elected officials not pull the rug out from under our libraries and places of learning.

It would be great for our city to be a place where the latest MICHAEL MOORCOCK, JOE R. LANSDALE or DAVID LISS book is greeted with an enthusiasm that matches the opening weekend of AVATAR or the new season of LOST.