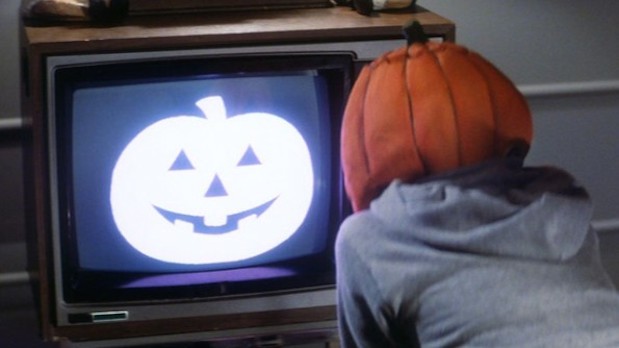 If you’re a horror buff you undoubtedly have a go-to film when the Halloween spirit drifts in on cool autumn air. You know, that one you find yourself glued to the instant it pops up on the cable horror marathon.

In my case, it’s The Shining. I find it impossible to resist its calling. Stanley Kubrick’s camera bestows the haunted hotel with an unsettling beauty and Jack Nicholson’s performance is a brilliant tightrope walk between hammy and terrifying.

I asked other writers — some who specialize in horror and others who don’t — what fright flicks they’re most likely to throw on the DVD player this time of year. Here’s hoping the answers send you exploring creepy new cinematic territory or revisiting old nightmares.

Lee Thomas: Lee Thomas is the Lambda Literary Award and Bram Stoker Award-winning author of more than 20 books, including The Dust of Wonderland, In the Closet, Under the Bed, The German, Torn, Ash Street, Like Light for Flies and Butcher’s Road. Writing as Thomas Pendleton and Dallas Reed, he is the author of the novels Mason, Shimmer and The Calling from HarperTeen. He is also the co-author (with Stefan Petrucha) of the Wicked Dead series of books for young adults. 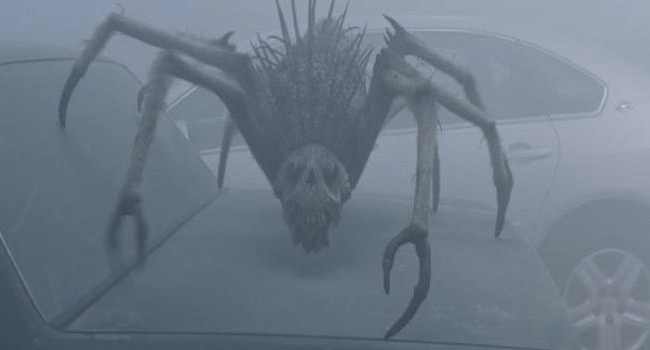 One of the nightmarish creatures that emerges from The Mist.

While season-specific titles – Halloween (1978) and Trick ‘r Treat (2007) – always make for great viewing this time of year, I have a – relatively – new seasonal favorite in Frank Darabont’s adaptation of Stephen King’s The Mist (2007). Great performances from the cast and a nihilistic ending that will piss off grandma, The Mist is a modern creature-feature classic. I watch it in black and white, which ups the nightmare vibe considerably.

Yvette Benavides: Yvette Benavides is an author of literary fiction, often set on the U.S.-Mexico border, and an associate professor of English at Our Lady of the Lake University. She teaches composition and literature courses as well as courses in the combined MA/MFA program in literature, creative writing and social justice.

Let’s Scare Jessica to Death. I guess it’s the first one that comes to mind because it is the scariest — at least the early imprint of it. (It was made in 1971.) I watched it on late-night TV a few years after it was made, when I was maybe 8 or 9. An emotionally/mentally fragile woman feels unsafe in her home. That’s scary. The psychological vampires won’t leave. 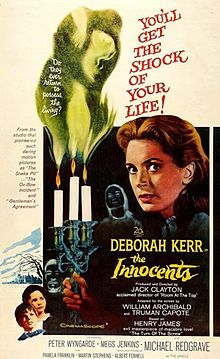 Steve Rasnic Tem: Steve Rasnic Tem’s short fiction has been compared to the work of Franz Kafka, Dino Buzzati, Ray Bradbury and Raymond Carver, but to quote Joe R. Lansdale: “Steve Rasnic Tem is a school of writing unto himself.” His 300 plus published pieces have garnered him a British Fantasy Award, and nominations for the World Fantasy and Bram Stoker Awards.

It varies over time, but again and again I find myself returning to Jack Clayton’s The Innocents. It’s wonderfully atmospheric, and explores very well the idea of how the past can maintain a terrible hold on the present.

Joe R. Lansdale: Champion Mojo Storyteller Joe R. Lansdale is the author of over forty novels and numerous short stories. His work has appeared in national anthologies, magazines, and collections, as well as numerous foreign publications. He has written for comics, television, film, newspapers, and Internet sites.

The Haunting, the original version. Why is because it truly creeps me out and edges between psychological and possible supernatural.

Elizabeth Bourne: Writer and photographer Elizabeth’s fiction has been published in Black Lantern, Fantasy & Science Fiction magazine, Interzone and Clarkesworld. She loves writing genre and is currently working on a second-world fantasy novel and a mystery set in prohibition era San Francisco.

My #1 go-to Halloween movie is The Haunting, based on Shirley Jackson’s phenomenal, and phenomenally creepy, book The Haunting of Hill House. This is one of those wonderful instances where the book and movie are equally good. What higher praise can there be than that Stephen King wrote Rose Red (shot in Tacoma’s Thornewood Castle) as an homage to this masterpiece.

Stina Leicht: Stina Leicht is a sf/fantasy writer living in central Texas. Her latest novel is titled Cold Iron, a new secondary world flintlock fantasy series for Simon and Schuster’s Saga Press. The next book in the series, Blackthorne, will be released in 2017. Her second novel And Blue Skies from Pain was on the Locus Recommended Reading list for 2012. 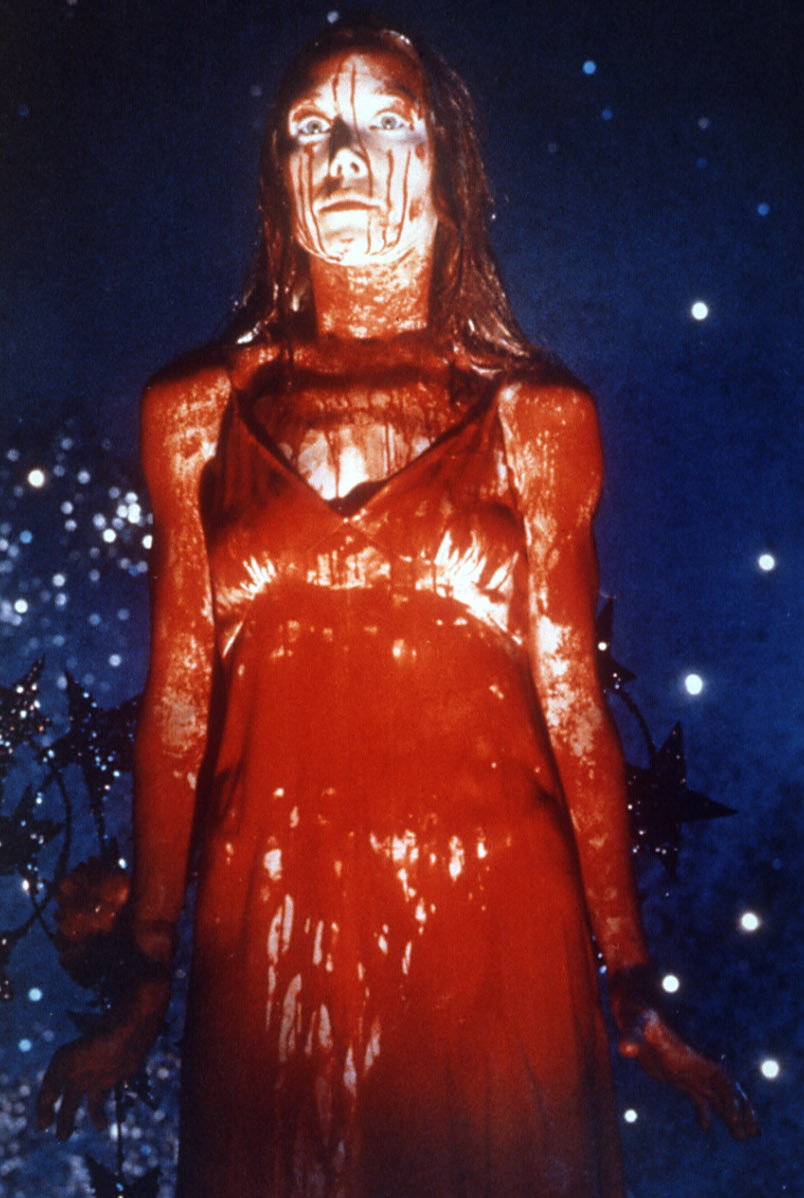 Because of my love of good horror I can’t limit myself to one film. So, here are my four favorites. The first is The War of the Worlds (2005). It has layers beyond the main plot. It talks about the transition from boy to man. Both Ray and his son, Robbie, demonstrate this growth forced upon them by tragedy. (Too bad the women don’t.) The scene in the basement of the farmhouse packs a wallop. Also? The tripod animation just rules. My next pick is Invasion of the Body Snatchers (1978). Like WotW, Body Snatchers has been remade quite a bit, but the team of Donald Sutherland, Brooke Adams, Jeff Goldblum and Veronica Cartwright did it best. The film is extremely creepy, particularly the end. I’m a huge Stephen King fan, and I’m torn between The Mist (2007) and Carrie (1978), but I’ll pick Carrie today. Sissy Spacek captures Carrie’s frail vulnerability perfectly. And that’s the important thing to remember about Carrie, I feel — it’s that transition from victim to perpetrator that is so relevant today. It says a lot about extremist Christianity and misogyny. My last pick is between American Werewolf in London and Cabin in the Woods (2012). Joss Whedon isn’t perfect — no one is — but Cabin is a gem from the first scene to the last. Price of admission is the merman scene.

Josh Rountree: Josh Rountree’s short fiction has been published in a variety of magazines and anthologies, including Realms of Fantasy, Polyphony 6 and Happily Ever After. His short fiction collection, Can’t Buy Me Faded Love, is available from Wheatland Press. His first novel, Alamo Rising, was co-written with Lon Prater and is now available from White Cat Publications.

The Shining. It’s different than King’s book but just as amazing in its own way. Both the movie and the book still scare the crap out of me every time.

Derek Austin Johnson: Derek Austin Johnson has lived most of his life in the Lone Star State.  A member of the Turkey City Writer’s Workshop, his work has appeared in Rayguns Over Texas! edited by Rick Klaw, Nova Express, Moving Pictures, Her Majesty’s Secret Servant, and Revolution SF.  His film column “Watching the Future” appears each month on SF Signal.

Pontypool (2009, d. Bruce McDonald). There’s much to love in this suspenseful movie, from the claustrophobic setting to a surprising amount of humor. Combining elements of Henrik Ibsen’s A Doll’s House and director Danny Boyle’s 28 Days Later, Pontypool stands as one of the most intriguing of zombie movies.

Scott A. Cupp: Scott A. Cupp is a writer from San Antonio who has been associated with the science fiction community for more than 40 years. He has been a regular reviewer at Mystery Scene magazine, where he reviewed western and horror novels, and at the Missions Unknown blog, where he did columns on Forgotten Books and Forgotten Films. 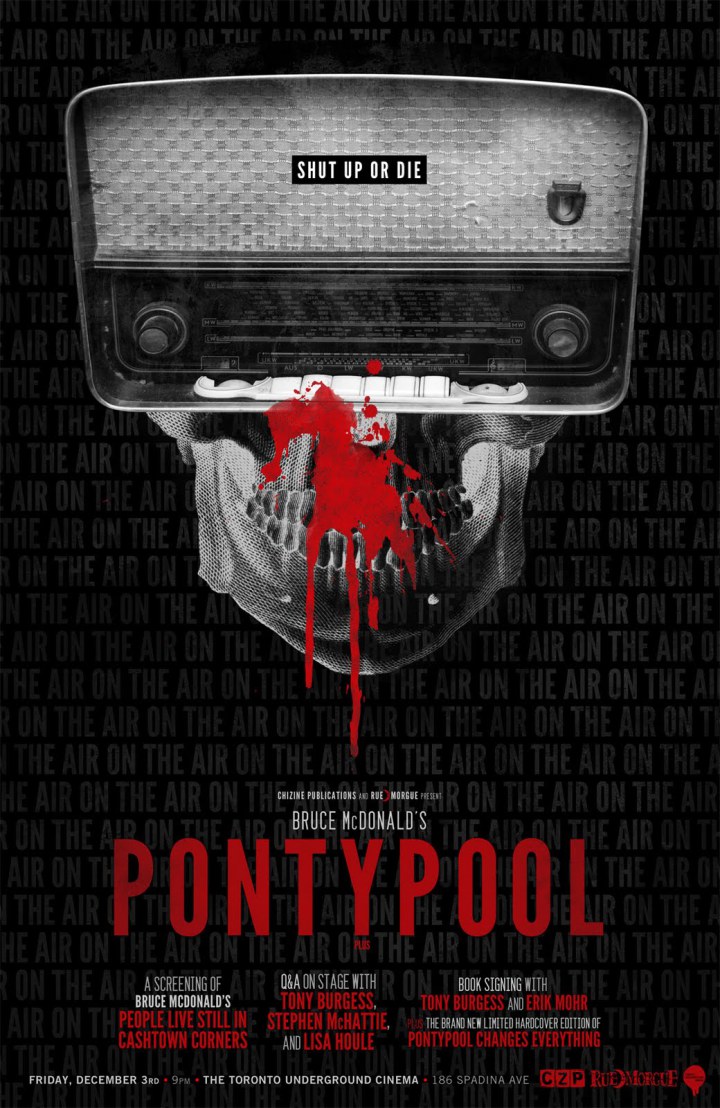 When the Halloween season comes around I love catching up on great horror films. Among those I remember fondly this time of year are William Castle’s 13 Ghosts which I saw when I was 8 or 9. You had a special viewfinder to see or not see the ghosts when they appeared. Of course, I watched them all, then I had to walk home in the dark. Every shadow haunted me on that trip. As more of an adult, I loved the original Lugosi Dracula, particularly when Van Helsing and crew kill Lucy Westenra in the crypts of London. It was a creepy scene heightened by my memory of that particular passage in the novel, which is one of my favorites. Of course, my forgotten film this week, The Leopard Man, has a scene where a young girl afraid of the dark has been sent out for corn meal to make her father’s tortillas. On her way home she encounters a leopard that has escaped its leash. She runs home screaming to be let in but the door is bolted and her mother feels she is shirking her duties. The cries and beatings get more frantic and suddenly the screams are visceral and there are other, animal sounds. Then there is silence as blood seeps under the door. All in chilling black and white. This is noir horror at its best. I also love all of the 1963 version of The Haunting for its psychological terror.