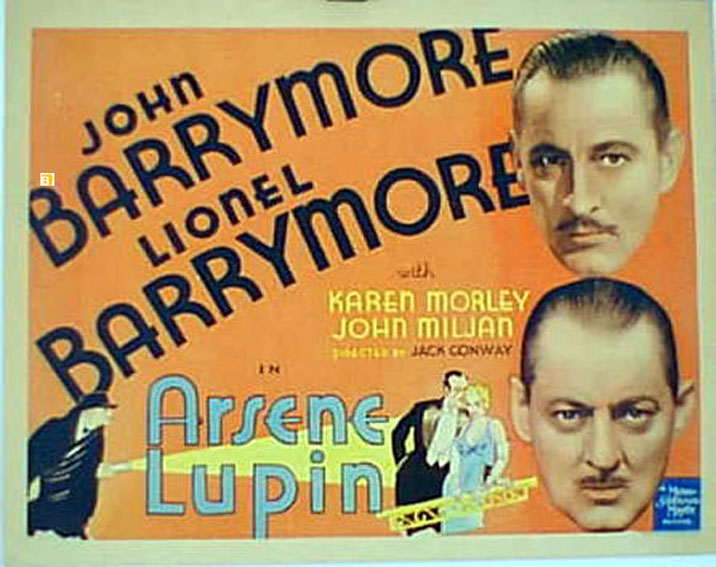 Two Barrymores star in this 1930s film about the gentleman thief.

This is the 178th in my series of Forgotten, Obscure or Neglected Films

It was a tough choice this week selecting a Forgotten Film. On one hand, I had more of TCM’s giant creature movies on the DVR and I watched The Deadly Mantis in preparation for the review. But doing two similar films in a row was not how I really wanted to go. So, I glanced through the DVR and ran across Arsene Lupin, a mystery/thriller from 1932. I love older mysteries and the character of Arsene Lupin, so this film won out.

The character of Arsene Lupin, gentleman thief, was first introduced by Maurice Le Blanc in a series of short stories in 1905. By the time this film was made, Lupin had appeared in at least ten films and several plays as well as a number of short stories and novels. Wikipedia shows 19 volumes before the release of this film.

Aside from the subject matter, the film is also notable for being a team-up of John and Lionel Barrymore, two massive stars of the silver screen.  John gets the role of Arsene Lupin and the Duke of Charmerace, a broke aristocrat who runs a robbery ring as the gentleman burglar Arsene Lupin. The film opens with a trussed up servant of Gourney-Martin knocking a telephone off the table and calling the police. He says the house is being robbed by someone approximately six feet tall with a limp. The call goes to the dispatch, where it is identified as possibly being by Arsene Lupin. The call is given to Guerchard (Lionel Barrymore) who is one of the best in the Paris police.

As the police approach the house, the thief flees, but Guerchard follows. When they find the fleeing vehicle, it is abandoned except for a bound, well-dressed figure. The captive identifies himself as the Duke of Charmerace (John Barrymore). Guerchard says that’s a lie. The banter between the mysterious man and the officer continues back and forth continues until Gourney-Martin (Tully Marshall) arrives from the opera and identifies Charmerace to the police. Guerchard believes that Charmerac is still Lupin and was after Gourney-Martin’s famous emerald necklace and other jewels.  Gourney-Martin explains to Guerchard that Lupin would have been disappointed because the jewels are in the Gourney-Martin villa in the countryside. Charmerace hears this at the same time.

Gourney-Martin plans to head out to the countryside to make sure the jewels are OK. Charmerace has a party to host the next evening for his birthday. Guerchard is planning on having men at the party to keep an eye on him. At the party, Charmerace finds a naked woman in his bed. Her name is Countess Sonia (Karen Morley), and the strap on her gown has broken and is being repaired by some of the servants in the next room. Banter and innuendo ensues between the two.

Also at the party are collectors looking for more than a half million francs, which Charmerace promises to pay on the morrow. When the lights are turned out, women’s jewelry goes missing. The police search everyone, but the jewels are not found.

Gourneey-Martin has been at the party and asks Charmerace to come with him to the villa. He agrees and decides to bring Sonia along with him.  Guerchard is interested in this development, as Sonia notifies him about the trip, since she is working for the police.

The rest of the film deals with Lupin taunting Guerchard and threatening to steal the Mona Lisa from the Louvre on the following day, in front of the police and Guerchard.

It is a pretty decent film. The two Barrymores show why they were among the most noted actors of their time. Many have played Lupin over the years and John Barrymore was among the best. So, if you have the chance, it is worth spending the 84 minutes with this one. A classic film featuring classic actors in classic roles.