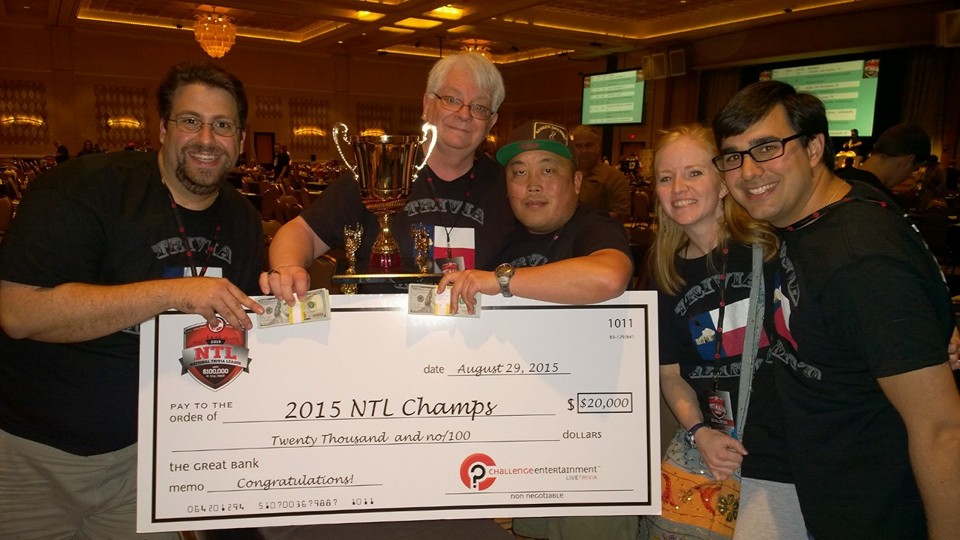 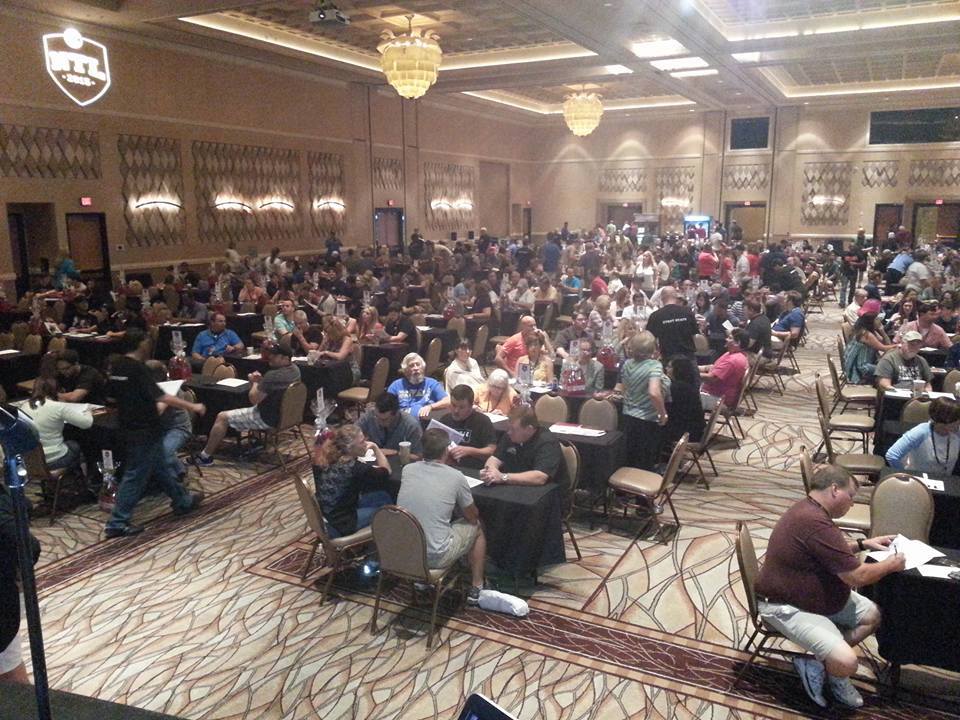 Then they announced the State Championship. Qualifying teams from San Antonio would compete against teams from Dallas and Houston. Our team had changed as Shawn became a trivia jockey and was replaced by my other nephew Cody, who was Wes’ brother. Sixty or so teams going mano-a-mano. We went to the first contest and again were in about Fourth place when the Final Question was asked. At this point, I should say that at these higher level games, the Final was worth up to 30 points. We had nothing to lose and went all in. We got the Final right and went all the way to Second Place. We missed first by 2 (!!!!!) points. First Place was won by a Dallas team who got $5,000. Second was $750. That’s a strong incentive to finish first. 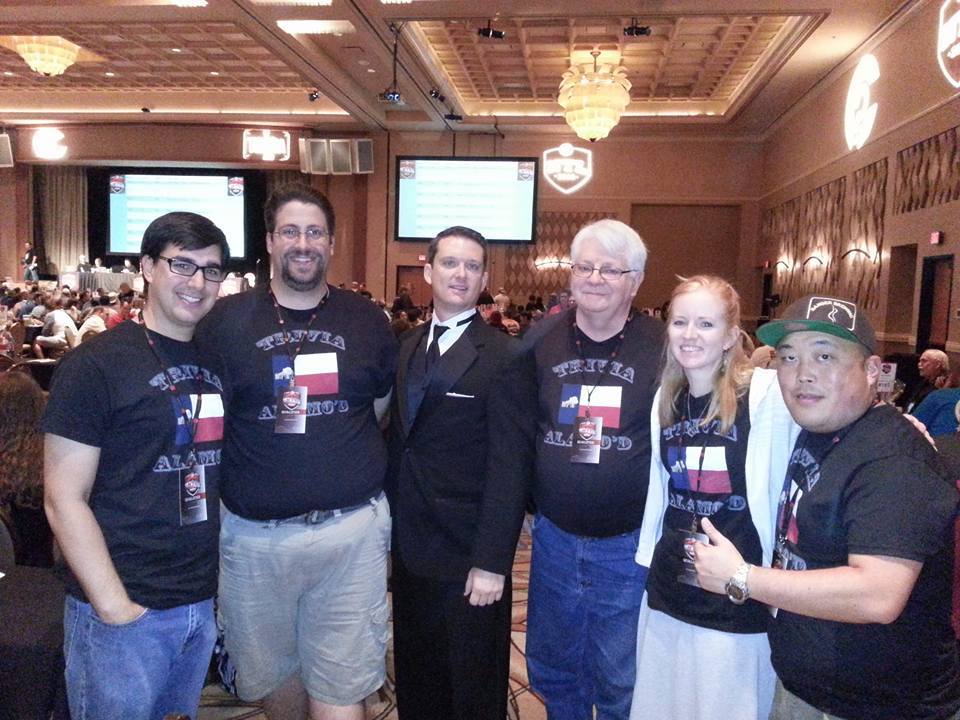 The next season, we didn’t win the City Championship (we missed that Final). But we qualified for the state Finals in Houston in August 2013. Again we were in Third Place going into the Final. This time we got it right. We won that sucker and someone else finished Second by 2 points. I felt their pain.

We played together for another six months or so before Life began to complicate things. Sanford got a new band. Cody’s kids got to an age where they were constantly in need of his attention (they are so cute that you cannot begrudge him). Wes had work issues.

Eventually I dissolved the team and began to look for another good combination. Finally I settled into a regular rotation with my friends Ryan Wyllie and Adam LaHood. Ryan had won two City Championships with “Fantastic Four Plus One” and “Viagra Falls”. Adam had been close a couple of times, but he knew stuff that no sane person should know.

Then came the announcement last October. There was no longer going to be a State Champion. Instead, they were going for a National Champion. The qualifying tournament would go for six months – January through June. The top teams at each venue would qualify for the big dance. Unfortunately, it was going to be in August in Las Vegas.

Being the shy and retiring types that we are Ryan, Adam and I began to search for the two additional people who could complete our group. We knew we were somewhat weak in Sports and Geography.  We played with a lot of people in a lot of venues, trying to get that right mix. We eventually (like mid-May) settled on a young couple – Steven and Sarah. They were young, incredibly bright, and were a good fit on the personality side too. The kind of players you like to play with.

We asked if they were willing to commit to going to Las Vegas. They were ready to go. And they would only go as a pair. Take one, you take both. That was fine with us. 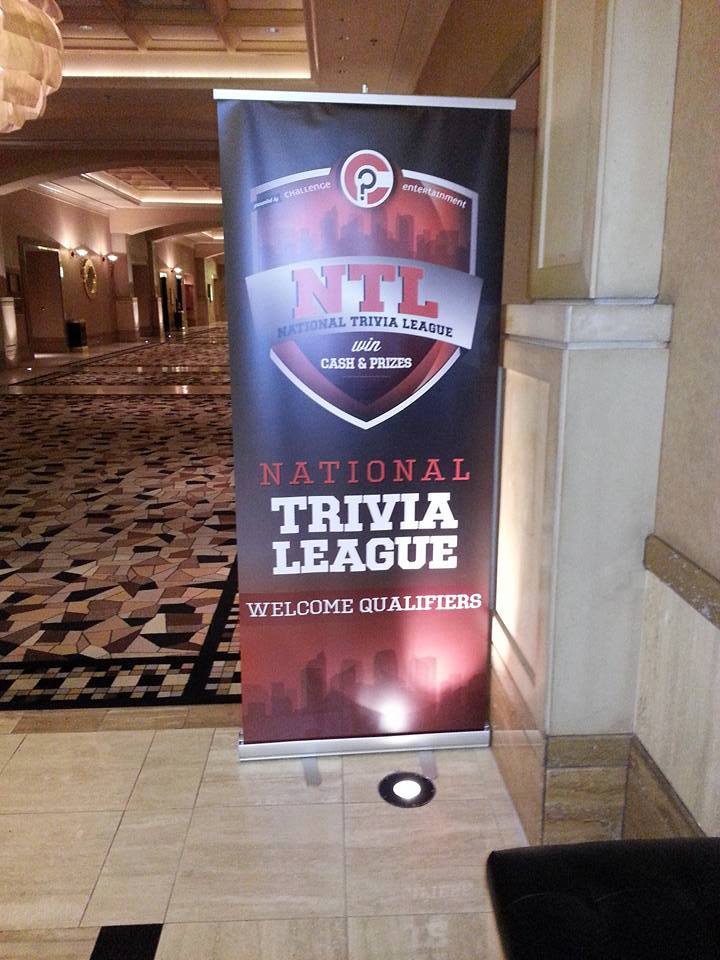 We trained hard, tackling a lot of subjects. The younger ones (Steven, Sarah, and Adam) could soak up knowledge immediately. My mind tried to learn a lot of things I didn’t know. The morning of the contest I memorized the last 55 Best Picture winners by year.

There were challenges along the way. We won the City Championship, again coming from behind. There were behind the scenes health and family issues. We almost didn’t make it there. But August 28 found all five of us (and Sandi) checking in and preparing for the battle.

The contest started at 11:00 AM. We were team 175 out of 202 teams from 91 different cities, located way in the back on the far left from the stage view. The format was the normal three questions per round, but now there were five rounds per half. After the first 15 questions, we had missed four questions that we had valued at two points each and we got the halftime question correct. Giving us 64 out of a potential 72 points. This put us in Fourth Place at the half, a full six points out of First Place. A team from Huntington Beach, CA. had missed only a two point question.

To give you an idea, here are the four questions we missed: (answers at the end)

I hope you are scratching your head, because we were. I knew the last name of the writer on Question 2 but could not remember her first name, until five seconds before they read the answer.

The second half was also very tough, but it seemed to find our wheelhouse. Through the 15 questions, we missed one worth 7 points. I thought we had it right, but I was wrong.

I knew the Pony Express started in St. Louis and ended at Sacramento so one was in the bag. I was sure it went through Denver but it did not. Probably too rugged at that point. Salt Lake City and Carson City were the other two towns.

So, with a strong second half, we found ourselves in Third Place going into the Final Question. We had 162 out of a possible 177. First Place was still the Huntington Beach team and we were still 6 points behind. One other team had 163 points.

So it comes down to the Final Question. Here it is.

Put the following things in chronological order with the oldest item first and the most recent item last.

Given our diverse backgrounds, we knew three pretty much dead on. The outlier was Mir. We knew it had to be after the fall of the Soviet Union, so we went with:

Eventually they announced the answer. We were right. We knew then that we could finish no worse than Third. As they read the top 20 teams, we suddenly heard the team that was one point ahead of us. They had dropped out of Second Place. Suddenly we could do no worse than Second. When they got to Third Place, we heard “Huntington Beach 168 points”. We knew we had won!

Adrenaline is a wonderful thing! We were yelling and screaming and high fiving and jumping up and down. It was Heaven. We got a huge trophy with two $10,000 bundles of $20 bills in the cup. People stopped by and congratulated us. Pictures were taken. Things happened. I honestly don’t remember much.

My former team mate turned trivia jockey Shawn Lauderdale was the host of the event. He had a nametag that said “Head Question Reading Monkey”. The first trivia jockey I met Miguel Sanchez and his wife Cassie were there. Sandi was there. Adam told me to double my money by putting it all on Red.

We were emotionally drained and relieved. Eight months of hard work and we did it.

The whole thing took nearly five hours. Or was it four years? There will be another championship in Las Vegas next year. The team is already committed to defending our championship. Can we repeat? Sure. Anything is possible.

Answers to the four questions and halftime

2 thoughts on “How to conquer the trivia world”