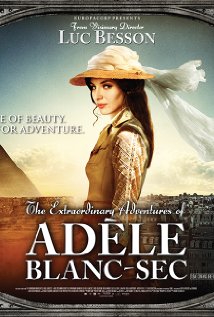 Adele promises a pterodactyl and Ramses II. How can you go wrong?

This is the 129th in my series of Forgotten, Obscure or Neglected Films

This is my recommendation of the week. If you like the sort of films I review here, you should go out and find this film right now. Don’t even bother to read this review. Just go see the film. You will thank me later. I’ve watched this one twice in the last two months and purchased the DVD. That should give you some idea of my love of this movie.

Those who have already seen this film know what I am talking about. Such a fun film. Our title character (and she is a character) is a journalist working in France in 1912. Her exploits are read by ardent admirers. She is smart, sassy, daring and unafraid of the consequences of her actions.

I don’t want to really summarize the film. That might detract from your enjoyment. Let me just mention a few of the things you will encounter – a pterodactyl, an Egyptian tomb, animated mummies, a beautiful young girl in a hatpin induced coma, betrayal, explosions, Ramses II, attempted prison breaks, drunks, stupid big game hunters, over-worked and underfed policemen, a firing squad, a guillotine beheading, the Louvre, the President of France, people wrapped alive in mummy trappings and canoeing inside a sarcophagus. And there are some apes at the end, but only briefly.

I know I had most of you at pterodactyl or mummies.

The DVD case compares the film to “Amelie meets Indiana Jones.” That is not an unfair comparison but still not very adequate. Director Luc Besson (The Fifth Element, La Femme Nikita) takes several graphic novels of Jacques Tardi about Adele and makes a fine adaptation. Actress Louise Bourgoin does a fine job as Adele. I would watch other films with her in the lead.

The downside of Adele is that it is foreign and all the dialogue is French, so you have to read the film. That’s never a problem with me, as too many years of loud rock and roll has deprived me of some hearing and I frequently have subtitles on when watching films and TV, particularly if there is a British production involved. Some accents do not translate well with my ears, unless accompanied by screaming guitars.

Seriously, go watch this film. The ending certainly sets up the premise for a sequel but, to date, none has arrived.

5 thoughts on “Forgotten Films: The Extraordinary Adventures of Adele Blanc-Sec (2010)”