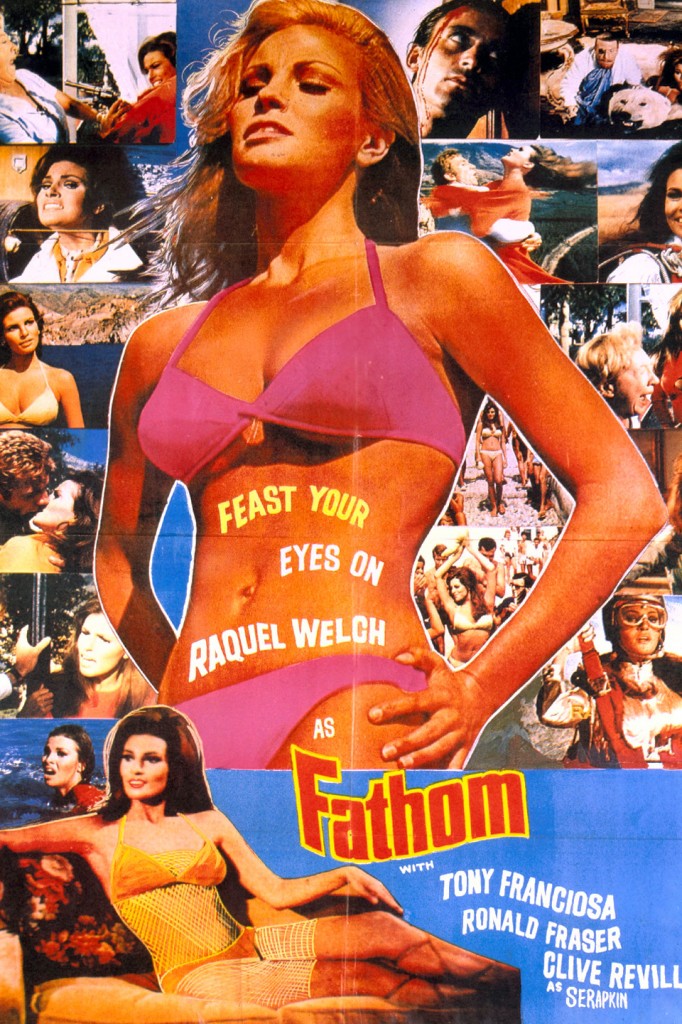 This is the 164th in my series of Forgotten, Obscure or Neglected Films

We are now on a roll! Two Forgotten Film columns in a row! It’s good to be back on track. As I mentioned in last week’s article, I am in the process of moving. I am in one place while the wife, cats and stuff are in another. I am staying in a college dorm room where I have an internet connection but no television service. So I am somewhat restricted in what I can review.

I brought my Blu-Ray player with me, but without a working TV it does me no good. I brought a bunch of films too, but about half are Blu-Ray only so I won’t be watching them any time soon. Still, it’s good thing not everything in my collection is Blu-Ray.

The other day I was out at the grocery store and there was this big bin of previously viewed movies. This week’s title Fathom leapt up into my cart and I parted with $3.99 + tax to take it home. (You can tell I’ve been away from home for a while by my subject choice.) I had seen this movie many years ago but my memories are always a little hazy, so on a pleasant Saturday afternoon I settled in to a nice chair and fired up my computer for a refresher.

Fathom Harvill (Raquel Welch) is a dental hygienist turned skydiver who is training in Spain for a competition against the French. Following a nice jump, she is hijacked by Colonel Campbell and his aide Timothy (Ronald Fraser and Richard Briers, respectively), the men from HADES (Headquarters Allied Defenses, Espionage & Security). They want her to parachute down to a villa and activate a defective listening device they have there. It is a vital mission, as they are trying to locate the Fire Dragon, a remote detonator for nuclear weapons that was lost and may now have been located. Opposing her will be Peter Merriwether (Tony Franciosa, who got top billing over Raquel) and his Chinese girl friend Jo-May (Greta Chi).

When Fathom arrives, she discovers a man’s dead body and the blunt object used to kill him. She picks up said object and finds her picture being taken. Then begins a game of cat and mouse. Merriwether and Jo-May think she is working for Campbell, but she says “no.” They search her and find nothing that ties her to the others, so they take her into town. There she learns from the listening device that a man named Serapkin (Clive Revill) may have killed the dead man she found in the villa. Serapkin is a man of passionate tastes and Raquel is nothing if not passionate, so she finds herself in a tiny green bikini headed off to Serapkin’s yacht, armed with explosive earrings.

Up to this point, the film has been mostly straight forward, but this was the middle 1960’s and camp was somewhat in so Lorenzo Semple Jr.’s script becomes more farcical, not unlike some of the television scripts he had provided for ABC’s Batman show, which he had helped develop and for which he wrote many episodes.

The film develops into a campy Maltese Falcon with each side claiming the other is lying. Our heroine, naturally, cannot decide which group to believe. There are false leads and amazing lies and odd scenes, such as Merriwether and crew watching Fathom being chased around a bullring by a bull who is excited by her bright red dress.

At this point, I suppose I should mention the fashions in the film. It is the mid 1960s and it is Europe, and Raquel is an amazing canvas on which to display clothing or the lack thereof. The dresses are boldly colored and short, particularly the red dress and the bright yellow one. The bikinis are not micro but they are not what Annette Funnicello wore in her beach movies either. And the parachuting jumpsuits are amazingly tight in all the correct places.

No one will confuse Ms. Welch with Helen Mirren, Judi Dench or Meryl Streep, but she does play the naïve stranger role pretty well.

The character of Fathom was created by Larry Forrester in his 1967 novel A Girl Called Fathom. This film is based on his unpublished second novel, Fathom Heavensent. The first book appeared with Raquel on the cover, so I would assume people bought this book expecting to read the movie story. I’m sure they were greatly confused later.

Overall, I enjoyed the film. It went on perhaps 10 minutes too long (it runs 99 minutes) but that wasn’t a big deal. The early Raquel Welch was stunning, and she knows how to use her body to great effect throughout the film. This could have been a pretty good movie without the camp stuff, but as it is, it’s an okay way to spend a Saturday afternoon away from the wife and cats.

As always, your mileage may vary.