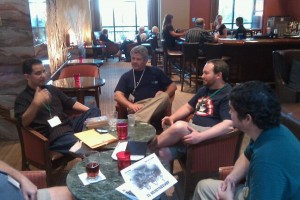 One thought on “It’s about the Books: Reflecting on last weekend’s ArmadilloCon”