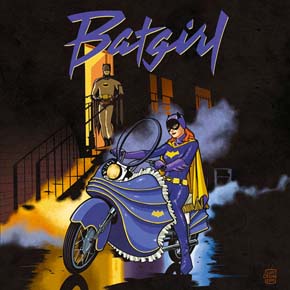 Comic artist Cliff Chiang has executed some fun mash-ups of his superhero illustrations with iconic 80’s album covers. My musical tastes during the period ran more toward Black Flag, Scratch Acid and Die Kreutzen than Prince, Duran Duran and the Flashdance soundtrack, but those album covers were so ubiquitous that I had no trouble recognizing Cliff’s riffs.

The Teen Titans posed like the Brat Pack on the “The Breakfast Club” soundtrack is pretty fun, but I gotta say my favorite is Batgirl and her bike a la Prince’s “Purple Rain” (something about that sparkly purple catsuit… or should I say “batsuit?”). Click here to see Cliff’s full collection.

This one spotted via Rene Guzman’s Geek Speak blog.