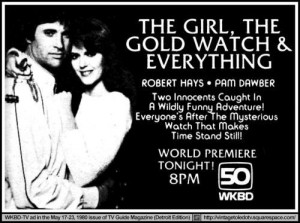 This is the 156th in my series of Forgotten, Obscure or Neglected Films

One of my favorite writers of all time is John D. McDonald. I’ve read a lot of his books; at some point I will read many more. I read all the Travis McGee novels, but my all time favorite John D. McDonald novel is The Girl, the Gold Watch and Everything. I’ve read it several times and I reviewed it as one of my Forgotten Books at some point in the past. I’m not sure when, because several of my reviews were lost when the Missions Unknown site succumbed to whatever evil it was that killed it. Some reviews had not been backed up (my very bad) and there are several which are not available in archived versions of the site.

So, when this book was announced as a made-for-TV movie in 1980, I was there waiting. I watched it. I was appalled. Kirby Winter was being played by Robert Hays, a TV actor who had not yet made his big splash in Airplane!, the film which was his next role. Pam Dawber, late of Mork and Mindy, was Bonnie Lee Beaumont, sporting a horrendous South Carolina accent.  My beloved book was being sanitized and bastardized into pabulum for the masses.

So, for 35 years I have hated this film as the epitome of bad made-for-TV movies. And I was happy with that.

This week, I was going to watch Svengali with John Barrymore, a silent film that I had on VHS. I put the tape in and while the tape was moving, I was not getting the picture. I tried several times but it was just not tracking correctly…

So, suddenly I am looking for something to watch and review. I was sitting in the floor with the DVDs and was trying to decide. Should I do The Point with its wonderful soundtrack and hippy-dippy story? What about Bakshi’s The Lord of the Rings? Or Roger Corman’s Forbidden World, an amazing Alien rip-off? All these were on the tapes in front of me. And I remembered that they were not going to last too much longer, as VHS tapes have a half life of 25 years or so (or at least that’s what I have been told). Anyway, The Girl, the Gold Watch and Everything popped up and the next thing I knew I was shoving it into the player and watching it.

The movie’s protagonist, Kirby Winter, is a lovable loser, who worked for his uncle Omar Krebs. His uncle, worth $220 million dollars has died and Kirby is anxious as the will is read. Turns out Kirby’s inheritance is a gold-plated watch. And that’s it.

Suddenly the Board of the Krebs Foundation is noting that Omar moved $75 million into a side venture OK Enterprises, which Kirby worked for. The only other employee, the sexually-repressed-and-not-loving-it Miss Wilma Farnham (Zohra Lampert), has burned all the company records according to Omar’s instructions.

As a result, Kirby and Wilma are being hunted for embezzlement. Omar’s competitors Joseph Locordolos (Ed Nelson) and Charla O’Rourke (Jill Ireland!) are trying to unearth Omar’s secrets and are using Kirby to try and find out anything.

This leads Kirby to find a new place to stay. His hotel manager, Hoover (Burton Gilliam, notable in Blazing Saddles, not so much here), finds him a friend’s apartment. While there, Kirby is visited by Bonnie Lee Beaumont, who mistakes him for her boyfriend. This mistake leads to anger and then strangely to attraction. While having a hot dog, Kirby accidentally sets the watch and finds that he can stop time around him. He is able to act while everyone remains frozen in the moment.

So far, the film is OK – not good but OK. But from here, it goes bad. The way to fix things seems to be to undress people or leave them in awkward situations. Dressing hired guns up as Las Vegas showgirls is TV-risqué but not particularly effective.

The film was not as bad as I remembered, but it is still not good. I saw this so you do not have to. Nor do you want to see the sequel, The Girl, the Gold Watch and Dynamite (1981), which thankfully does not feature Hays or Dawber but does not replace them with anyone better.