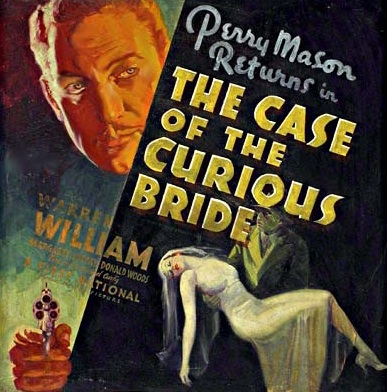 The Case of the Curious Bride is an early Perry Mason mystery.

This is the 183rd in my series of Forgotten, Obscure or Neglected Films

This has been a week! Normally, depending on other commitments, I try to watch a film during the week, then I write up my thoughts on Sunday. This go-round, I was going to have to both watch the film and do the write-up on Sunday.

I had thought to do The 39 Steps, the early Hitchcock version since I had recently seen a dramatization of it, but I could not locate my copy of the film. I had recorded Man Hunt, but when I went to watch it, the recording was of a 1933 film starring Junior Durkind, not the Walter Pigeon and George Sanders suspense thriller. I thought I would watch the Durkin one, but after 10 minutes I turned off the recording and deleted the film from the DVR. I made it 5 minutes further than Sandi did. So, I dipped back into the DVR.

I pulled up The Lost Continent, a Hammer thriller from 1968 with Hildegaard Neff, Eric Porter and Suzanna Leigh. But the quality of the recording was iffy at best. Several times I got a message that the recording had been interrupted. Normally, these interruptions were for a few seconds and I was able to follow the film. But at one key point, the gap was substantial with a total change of scene and characters. I gave up on it also.

Back to the DVR. Hopefully the third time was going to be the charm. I had an early Perry Mason film recorded. I had seen several of the Warren William Masons, so I knew it would be fun. Up popped The Case of the Curious Bride, Williams’ second outing as Mason. The film went smoothly, so here we go.

Perry Mason has just completed a successful defense and is celebrating with his friends and associates. He has picked out some crabs and has gone to Luigi’s to make some fancy Italian dish. Afterward, he plans to leave for a long delayed vacation to China. While preparing the meal, though, he is interrupted by Rhoda Montaine (Margaret Lindsay), who wants to ask him about a problem one of her girlfriends has. The girl had previously been married and husband died four year earlier. She’s since fallen in love and wants to get re-married. But the first husband may be alive. Mason asks the girl’s name and address and Rhoda provides information, which proves false.

Mason is called away and when he returns Rhoda is gone. He has his meal and goes home. The next day, he finds that Rhoda was speaking of herself and that her supposedly dead first husband, Gerald Moxley (Errol Flynn in his second credited Hollywood role) has been killed. Rhoda is fleeing the city and is the obvious suspect. Her new husband, Carl, is suspicious of her behavior and her relation with Dr. Millbeck. Her new father-in-law, C. Phillip Montaine of Pasadena, wants the marriage broken up and offers Mason a lot of money to lose the defense. What’s more, the DA is out for blood.

Williams does pretty well as Mason, but Claire Dodds is wasted as Della Street who does not do much in The Case of the Curious Bride. Allen Jenkins returns as “Spudsy” Drake, Mason’s gopher and right hand worker. He provides a lot of comic relief to these tales, which I do not recall in the novels. (Come to think of it, it has been more than 40 years since I read a Perry Mason so maybe that could be a Forgotten Book column soon.) Olin Howard reprises his role as the coroner Wilbur Strong, who partakes of the gourmet meal with gusto and has a wonderful revelation when exhuming a body early on. And Wini Shaw has a fun song and dance number at the Midnight Burlesque doing a piece called “It Was a Dark and Stormy Night.” Sorry, no Snoopy sitting on his dog house.

These films will never replace the Raymond Burr TV appearances, but they are an interesting representation of the time. I found The Case of the Curious Bride worth a viewing. Perhaps you will too. But, as always with a film this old, your mileage may vary.