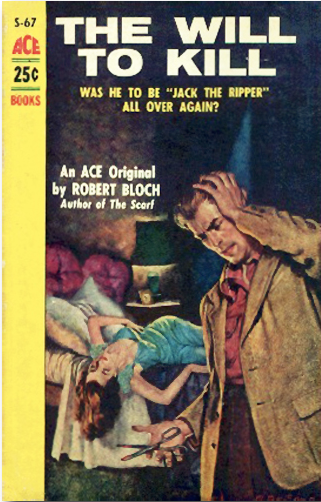 Robert Bloch's The Will to Kill is full of twists and turns.

This is the 172nd in my series of Forgotten Books.

After enjoying a Fredric Brown book last week, I thought it might be nice to try a novel from another classic writer. So I pulled my copy of Screams by Robert Bloch off the shelf. That volume contains three early suspense novels by the Psycho master, so I decided to go with the earliest novel, The Will to Kill.

I had read a lot of Bloch over the years, mostly his short fiction. His horror for Weird Tales was spectacular and he was an early acolyte/friend of H. P. Lovecraft. In fact, the two writers each did a story where they killed the other off by horrific means. Such a fun group.

The Will to Kill was, for many years, a legendary Bloch novel, available only as an Ace paperback original that was very hard to come by. Over the years, I searched for copies of this novel in many states. I did eventually find one in the late 90’s in Springfield, Missouri, at a small paperback house. I locates a lot of great titles that day, including the first five 84th Precinct novels by Ed McBain. I was about to check out when I saw this one behind the counter. The clerk said they were holding it for some customer but he had never come in. I asked when he was going to pick it up and the clerk said if it was still available on Friday, I could have it for $2. Come Friday I picked it up. 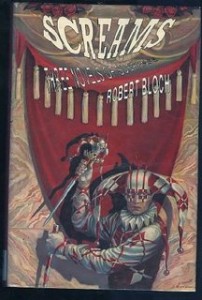 Screams collects three early Robert Bloch novels, including The Will to Kill.

I never got around to reading it before my Big Book Sale of 2007, when it went away to land on someone else’s shelves. So this last week, I decided to remedy that situation.

Tom Keller is a Korean War veteran suffering from PTSD, even though that phrase did not exist at the time. He has come home from the war to a loving wife. Sometimes Keller suffers from blackouts, fugue states where he wanders and does things that he does not remember. Following one of those episodes, he wakes up with scissors in his hand and a dead wife at his feet. Her throat had been cut … by scissors. He is jailed but eventually released when forensics prove he could not have performed the murder.

Now in another town, he runs a stamp, coin and book store where he works with his new girlfriend. He wants to be with her, but he still has his own doubts about the murder of his first wife. As the novel opens, Keller is recovering from a blackout and has no idea what he has done. He soon finds that he has told his girlfriend Kit about his fears and this drives her away.

While Kit is gone, Keller deals with a fat man with an obviously stolen stamp collection. He chooses the high road and does not buy the material, even though he could turn it into a quick profit. The seller is upset and leaves.

Soon, Keller encounters the fat man again at a bar, where he is abusing a woman and making threats. When Keller steps in, a knife comes out. But Keller is a veteran and disarms the man, ejecting him from the bar.

The girl he has saved, Trixie, invites him over and frantic sex happens at her place. Keller falls asleep, and when he wakes up, Trixie is dead. In circumstances similar to the previous murder he was involved with.

Keller is, of course, arrested and the earlier case is brought up. A blind man identifies Keller by his walk and the taps on his shoes as the killer. The murder weapon is identified as a poniard, a French style stiletto. And, of course, Tom has one in a case at his store. Or, had one, since the store has been broken into and the knife taken. The only possible lead is Trixie’s roommate. When the police go to ask her questions, she is found dead also. But, Tom was in police custody when the roommate was killed. And, of course, the same knife was used.

Kit shows up with a lawyer, Anthony Mingo, for whom she used to work and had been romantically involved. Tom, already unsure of himself, takes this new twist poorly and begins to doubt Kit’s affection for him.

The story takes several good turns and eventually resolves itself, but not before several unusual items from Tom’s and Kit’s past are revealed.

I really enjoyed this novel and read it in one sitting. And, with Screams, I still have two more early Bloch novels waiting for my attention, specifically Firebug and The Star Stalker. Bloch was really crafting his style at this point, leading up to his 1959 novel Psycho.

So, if you can find the Ace paperback, buy it. If not, get Screams and have three fun books. And, as with all such titles, your mileage may vary, but I doubt it. Bloch is fabulous.

Series organizer Patti Abbott hosts more Friday Forgotten Book reviews at her own blog, and posts a complete list of participating blogs. This week Todd Mason is hosting the listing.